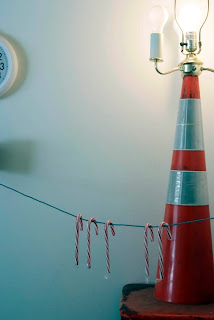 Posted by spriestapphotography at 8:40 PM No comments: 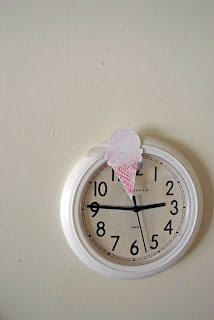 Posted by spriestapphotography at 7:40 PM No comments: 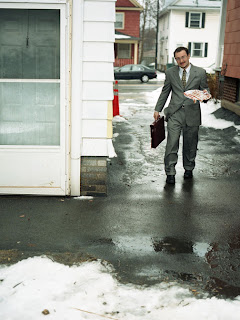 For my last project for Photo 2 I did a series on Idioms. This was my favorite
And yes, after being cooked, the Bacon was delicious.
Posted by spriestapphotography at 2:27 PM 1 comment:

So I went to Harlem/ The Bronx for my spring break trip. I think I meant to take more pictures, as I packed four rolls of film, but all in all, I only shot one (portra 400 nc... my favorite film :)- though I would have loved to take the Bronica with me... but it is bulky and I didn't want it to get lifted), not because of the lack of photo opportunities, but because I was walking with people most of the time, and I hate to be one of those obnoxious people that stops every few feet and takes a picture.
But there was one morning that I did get to take a walk alone through the Bronx and I was supposed to shoot examples of poverty (and I did), but I also took more of things that amused me- evidence of personality and culture. 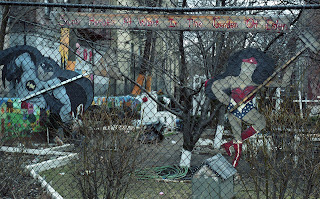 I found a community garden five blocks away from the house that I was staying in. In our bible study for the week we had been talking a lot about Eden and the concept of Shalom (or a perfect society), so I was very excited when I found this in the middle of a run-down neighborhood. 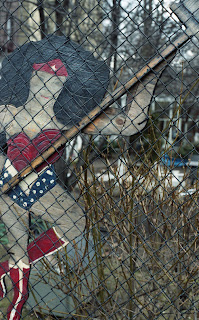 Better than that were the cutout superheros with gardening tools. That made me laugh. Alot. And I usually do not laugh out loud when I am alone.

In both the Bronx and in Harlem there are these stores everywhere- they're called Bodegas there, but they are just corner stores. I probably went into ten or so while I was there, and normally, there is milk, basic cooking supplies, some cereal, and a big section of cigarettes and lottery tickets. Cigarettes go for over seven dollars a pack. The average wage earned by most of the people there is about 6.70 an hour. There can be up to three bodegas to one block in the busier parts of harlem, these stay open and alive due to the fact that there are really no supermarkets there. It's an advantage to the owners, and a disadvantage to the people as everything at the Bodegas is overpriced, and often outdated. 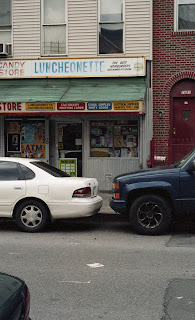 In the city, as there are hundreds (and sometimes thousands) of people to one block, it is hard for one to claim anything as their own. This made me laugh as well. I guy passed me as I was laughing and gave me a strange look. I don't know if it was because I was laughing or because I looked so out of place in the neighborhood- a white girl wearing pigtails and a hat taking pictures of some random mailbox. 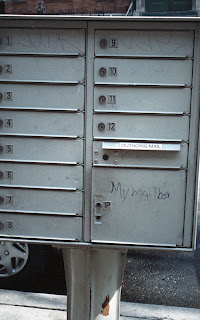 This was on the door of an auto place- painted bright yellow with a rust orange garage door. The bit of graffiti amused me. Angel would have to be pretty tall for a kid to get up that high. 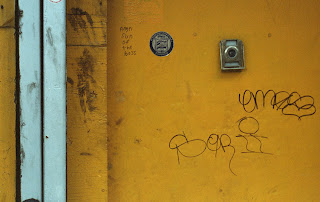 and now blogger is being stupid and not uploading my images. So I will have to do a second post.
Posted by spriestapphotography at 12:56 PM No comments: