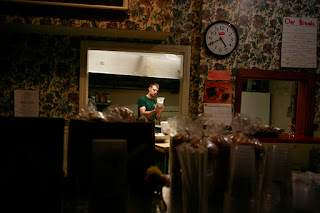 I'm working on a new photo column for the paper, which originally was going to be an E-Front, or a picture page featuring people who work late at night/ early in the morning. I had my first shoot this morning, in Claremont.

While I normally don't mind getting up early in the morning, this was a little new for me, as I had to wake up at 3 and leave my house at 3:30 to get to Claremont by 4:30. Todd, who gets to work at 4 or 5 every morning to make doughnuts, is no stranger to early mornings, but we both were rather quiet as he methodically cut and fried doughnuts. It was peaceful, to be some of the only people awake in the town at that point.

I'll share some more photographs from this column as soon as I can.
Posted by spriestapphotography at 4:37 PM