Two Standalones from this Afternoon 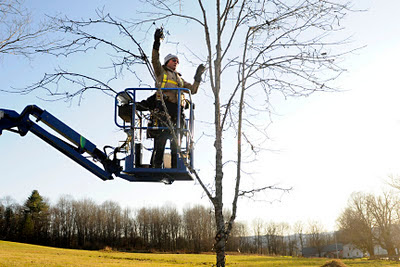 Elder Mike Charchenko winds a string of clear twinkle lights onto one of the trees lining the driveway of the Joeseph Smith Birthplace Memorial in South Royalton while his wife, Sister Jane Charchenko, operates the lift. The Charchenkos, who are LDS missionaries from Arizona, said the decorating, which has taken about a month, ending tomorrow evening, is in preparation for their Living Nativity display this weekend. 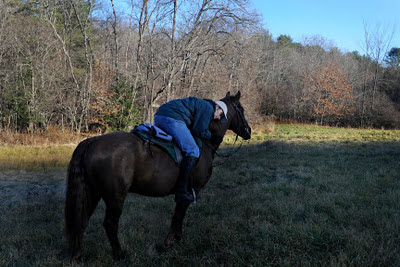 Susan Spain of Tunbridge hugs her horse "Raz" in the middle of a ride on the afternoon of November 21st. Spain and Raz compete in endurance races together though a bout with Colon Cancer kept her out of the saddle for a while. Now that she is in remission, Spain says she hopes to ride in her next endurance race in April.
Posted by spriestapphotography at 2:30 PM